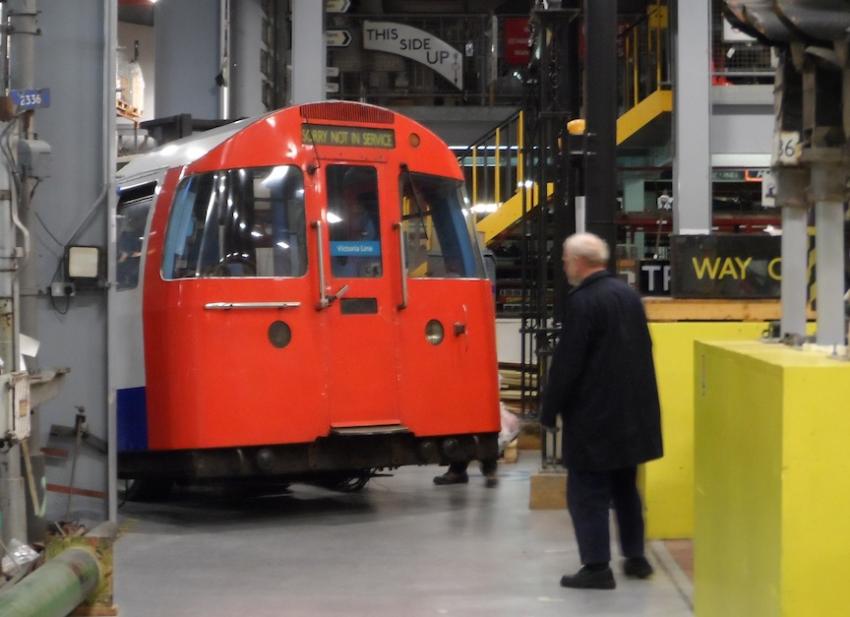 The objective of the Heritage Train Engineering Project is to provide an exhibit which demonstrates the working of the traction motor equipment cases (and later other key auxiliary equipment) of a 20th Century tube train. The “in progress” project is being developed to show how the trains worked. In parallel, signal engineers are developing a project to show how the associated signaling worked.

Courtesy of the scrap recycling company (Booths), a driver’s cab of a scrapped 1967 Victoria Line car and two motor control equipment cases were sourced and brought to the Depot. Various panels and covers were removed to give better sight of the working equipment. Working with a specialist metal conservation company (Context Engineering), the large cases were mounted on steel frames and raised in the air, so that visitors can walk underneath. The cases contain Pneumatic Camshaft Mechanisms (PCMs), 600V dc line-breakers, a 600V dc reverser, as well as various relays and other smaller control gear. This style of control gear was the best available technology for some 60 years and was phased out for new rolling stock at the end of the century, in favour of heavy electronic equipment.

The most recent phase of work has been to design and install wiring from the cab to the equipment cases to simulate 600V working. As a result, visitors can experience the “hisses and clicks” of 20th century Tube train operation and understand what causes them. The cab is accessible to people in wheelchairs.

The project has been planned and executed by a team who rightly call themselves the “Magnificent Seven”. The project is funded by the London Transport Museum Friends. Future stages of the project will include interpretative captioning, better to explain the exhibit to visitors.