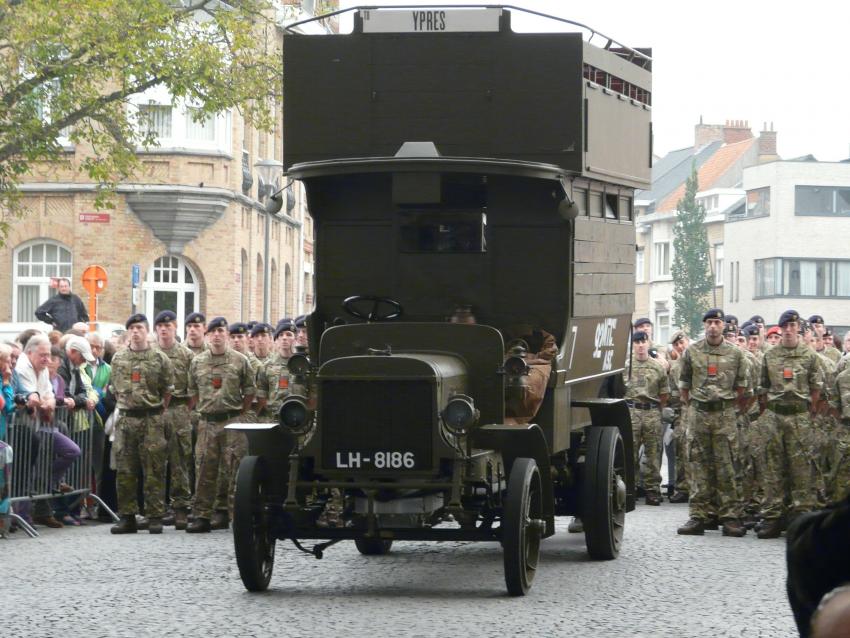 The project, developed to mark the centenaries of the First World War between 2014 and 2018, has returned one of the last surviving B-type buses in the country back into working condition and its wartime appearance, offering a completely new interpretation of this historically important vehicle.

The project has been made possible by a grant of £752,000 from the Heritage Lottery Fund. The Friends have generously pledged their support of the B-type project with £125,000 in partnership funding. In addition, the Museum looked to secure a further £100,000 in funding for both the restoration and wider activity programme. This further appeal was underwritten by the Friends


Introduced in 1910, when most buses were still horse-drawn, the London General Omnibus Company (LGOC) B-type was London’s most successful mass-produced motorbus, able to cope with operating conditions in the chaotic and overcrowded city. Building on lessons learned from earlier motor vehicles, the B-type quickly earned a reputation for mechanical reliability, helping to establish the motorbus as a practical vehicle for daily urban service in London.

After the outbreak of war in 1914, London buses, along with their drivers and mechanics, were commandeered for the war effort. The buses were fitted with protective wooden boarding and painted khaki for camouflage. The buses transported troops to and from the Front Line and were put to use as ambulances and even mobile pigeon lofts. Nearly 1,200 LGOC vehicles went on war service, most to France and Belgium, with some travelling as far afield as Egypt. The buses were finally retired from service in London in 1928.

The original basis of the project was to effect a restoration using the chassis of B1056, part of a collection of two chassis, three bodies and other component parts purchased by the Museum in 2012. But in May 2013, the project took an unexpected twist and benefited from an offer to purchase a part-restored B-type bus from private collectors, which importantly included an original engine.

The purchase of this vehicle was an attractive option to the Museum. It has enabled an accurate and faithful restoration to be undertaken, whilst minimising overall risk to the project, particularly in terms of the timescale for its delivery.  To meet the tight deadline, restoration tasks were split into distinct packages and progressed simultaneously by the team at multiple sites.

During October 2013, the team managed to source the remains of an original seat cushion that was once used inside the bus. Information gained from this remarkable find is proving invaluable in aiding the design and construction of the new seats. Having been responsible for the original fabric, it only seemed right to commission Holdsworth & Co. Ltd. to reproduce this wonderfully authentic material nearly 100 years later.

The identity of a vehicle starts with its chassis and the project team has been fortunate to establish that it used to be B2737. From scrutinising witness marks (rivet holes) on both side rails, it is evident the chassis once carried a four figure LGOC fleet number starting with ‘B2’. In addition, a second set of screw holes overlaid on top show the remains of where a ‘National Omnibus and Transport Co’ number plate was once fitted. From researching company fleet records, only 11 ex LGOC double decker ‘B’ types starting with ‘B2’ were sold second hand to the National. Of these, just the numerals of B2737 fit all the remaining frame fixing holes in the correct order.

A dossier of evidence was compiled and used to reclaim the original registration number from the DVLA. Interestingly, records show that, when new in January 1914, B2737 was allocated to Mortlake Garage in the Borough of Richmond, serving route 9 between Barnes and Liverpool Street. It was subsequently commandeered for use by the War Department and, upon its return, served for several months as a ' Khaki traffic emergency bus'. After being reconditioned for further use, it was finally sold to the National in February 1922.

Completion of the restoration was achieved in August 2014 according to plan.

The restored vehicle initially appeared in red London General Omnibus Co. (LGOC) livery, followed by painting into khaki in September 2014. To complete the transformation, the windows were then boarded up and War Department (WD) sundries fitted, such as pick-axes and shovels.

The project issupported by a five-year community engagement programme, which will give people from communities across London the opportunity to learn about, and experience for themselves, this historically significant vehicle and the role it played in the war effort.