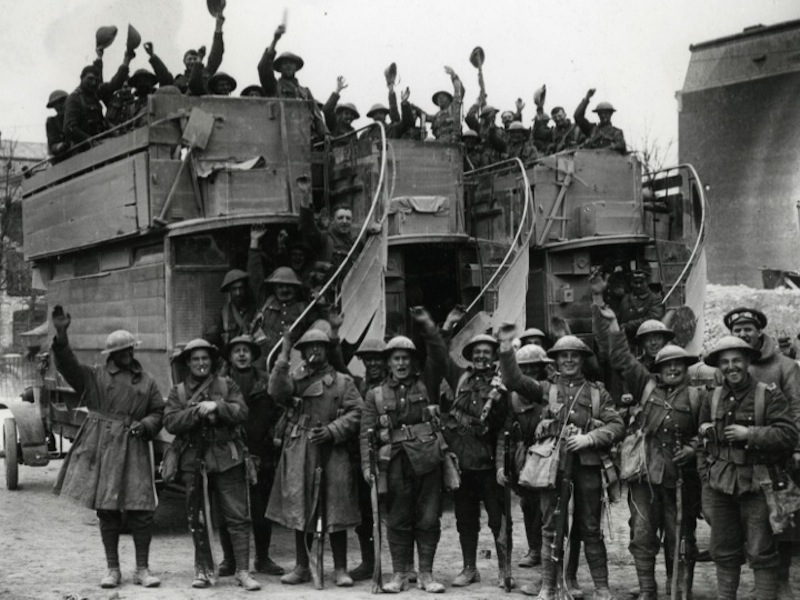 Saturday and Sunday 13th and 14th September will see the Museum will open the doors of the Depot for a weekend of activities focusing on the role of London’s Transport in the First World War.

The highlight of the weekend will be the 1914 B-type bus No 2737. Friends will see the effect of wartime transformation, stripped of its livery it will have been converted into a wartime Battle Bus, with khaki paint and boarded up windows, ready to transport troops to the Front Line.

There will be an opportunity to board the bus before it heads off on a commemorative tour to the First World War battlefields of Northern France and Belgium the following week.

More on London’s buses during the First World War can be discovered with talks from Dr Graham Winton and the Battle Bus restoration team and screenings from the Museum’s Goodbye Piccadilly exhibition.

Also on display will be four vintage motorcycles from the London Motorcycle Museum, including a 1919 Triumph Model H – a motorbike used in the First World War to provide effective communications with the front line troops

Other tours include the small object store and the bus pit, whilst the weekend also offers regular favourites such as Acton Miniature Railway, heritage bus runs and a range of memorabilia stands.

The Friends will be greeting visitors on arrival and selling a range of memorabilia and branded merchandise.

Entrance to the open weekend is free to all Friends.