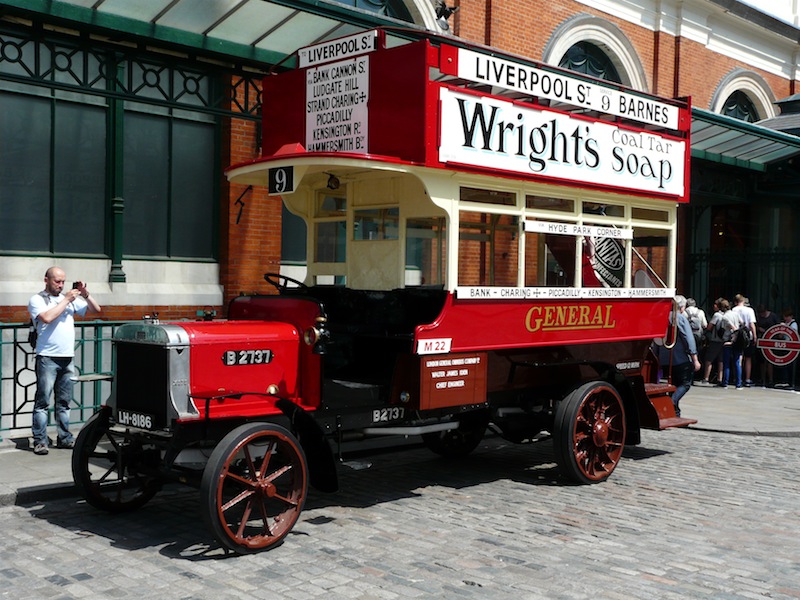 The Battle Bus restored to commemorate the many London buses and drivers that went to the Western Front, made its debut appearance this afternoon at Covent Garden.

To mark the centenary of the First World War, London Transport Museum led a fundraising campaign - with the help of the friends - to transform the 1914 London General Omnibus Company B-type bus No. 2737, into the wartime Battle Bus and recreate the journey to the battlefields of France and Belgium.

When war broke out in 1914, the B-types, were quickly commandeered for the war effort. Fitted with protective boarding and khaki paint, the battle buses transported troops to and from the front line and were even used as ambulances and mobile pigeon lofts. Nearly 1,200 LGOC vehicles went on war service, most to France and Belgium, with some travelling as far as Egypt.

In September, almost 100 years to the day since war broke out, London Transport Museum will recreate the journey made by the B-types and their drivers to Northern France and Belgium with a two-week long memorial tour to the Flanders Battlefields – including Ypres, Passchendaele and Arras, to pay respects to the sacrifice made by so many.

In order to raise a further £25,000, the Museum has launched a crowdfunding campaign where inn return for their support, donors will receive Battle Bus rewards including opportunities to see the bus up close, take part in transforming the bus into its wartime appearance, a ride in the cab or the chance to take part in the bus’s journey to the Battlefields.

The campaign runs until 18 July. Supporters can help by sharing the project with friends and family to enter a prize draw, or by making a pledge (from £20.00) in return for a range of exciting rewards. For more information or support the campaign visit: Buzzbnk