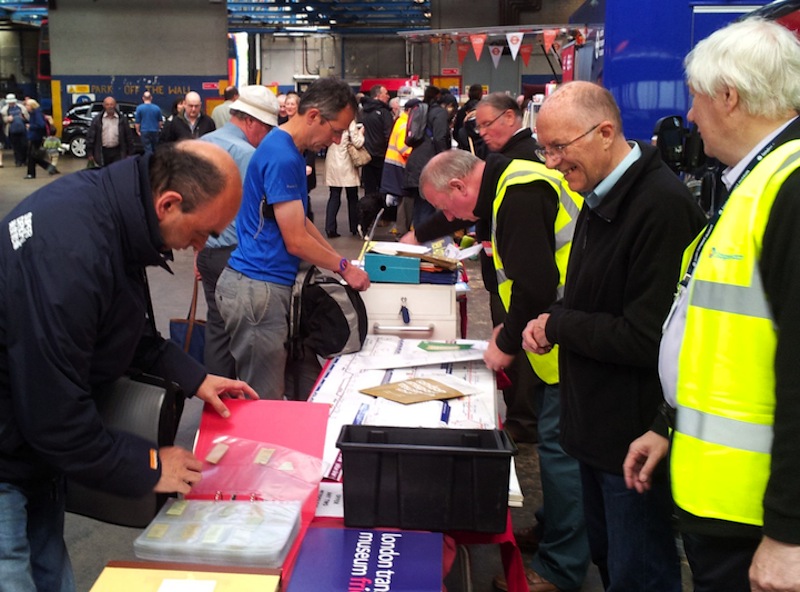 Hundreds flocked to Catford bus garage to celebrate its 100th anniversary was part of the Tfl and Museum Year of the Bus programme despite the heavy downpours.
Attractions included a line up of visiting heritage buses, including the Museum's RM1 and RML 2760 which numerically was the very last). Visitors could take heritage buses on special route 54V to Elmers End, and despite plentiful water outside, trips through the bus wash were very popular.
Local celebrity Edith Watling was invited to cut the centenary cake. She was a bus conductor working out of Catford Garage in World War 2. In April 1944 her bus was travelling along Lordship Lane when she heard a flying bomb cut out. Edith rang the bell for the bus to stop and called on her passengers to "get down", thereby avoiding any injuries when the bomb fell nearby.
There was strong support form the Museum and Friends, including the Museum pop up shop, Friends sales and information desk, TfL Safety and Citizenship bus. It was also the first appearance of the LT History Bus, telling the story of London's buses, with a focus on World War 1 Battle Bus and local stories relating to Catford garage and its staff.
Photo courtesy of Dave Olney
« back to news