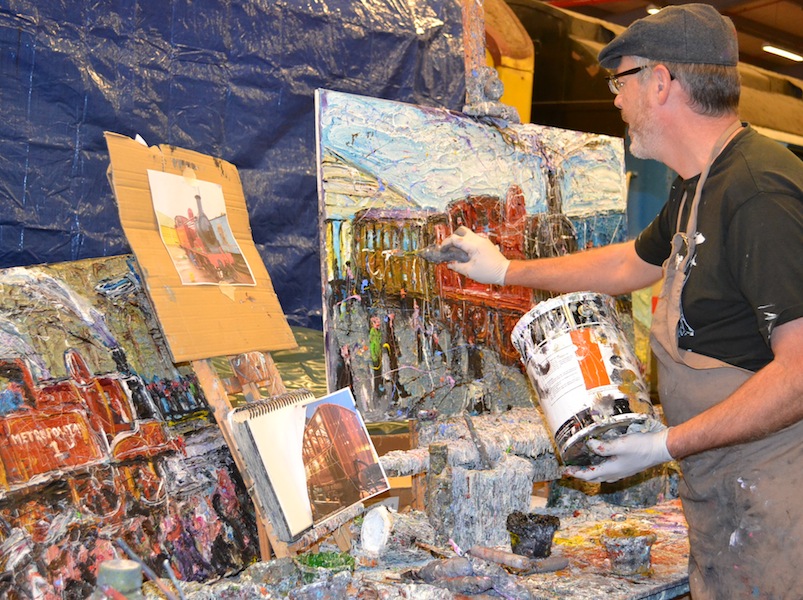 Open Weekends at the Museum's Depot at Acton are one of the busiest days in the calendar. Thousands of London Transport fans pile through the doors to experience everything the Museum's reserve collection has to offer.

For the first time, the Depot opened for three days and its was all hands on deck for the Friends. Such is the scale of the operation that the Museum is only able to open the Depot with the help of Friends.

Inside, they gave tours, demonstrated exhibits and assisted the thousands who came to see artefacts that are not normally on show to the public. Outside, the Friends operated the heritage bus service allowing visitors the opportunity to have a short trip on a couple of old London buses. Train lovers got to ride on the Acton Miniature Railway.

With so much more interest in the Underground generated by the 150th celebrations, demand for Met No1 and carriage 353 was high. Actors in costume added to the flavour. Artist Ross Ashmore - who was live painting Met No1 - also gave a talk about his 150th project to paint all 276 Tube stations.

For the Friends, the Open Weekend provided an opportunity to meet with Friends old and new. And amongst the 55 new recruits was former mayor, Ken Livingstone.

And over at the Friends' collectables stand, they took a staggering almost £10,000 from visitors and dealers.